I had a few questions heading into my first reenactment. Probably my number one question was how does one “die” during a battle?  I imagined all sorts of possibilities. Perhaps before the battle you drew from a deck of cards that accurately represented the casualties of the battle? If you drew the “die a glorious death” card you would do just that. Or maybe you would draw the crippling “take a flesh wound that hobbles your walk” card. Or much less fun yet more historically accurate would be the “died from consumption in camp before the battle” card.

As I soon discovered, taking a fall during a reenactment is much more a matter of a personal decision. Sometimes you may be encouraged to take a fall by your superior, or other times you might choose to be a casualty if your musket stopped operating correctly (a much more common occurrence). Or maybe you were a pro at reenactment like these French soldiers and took a fall for dramatic effect:

The First Battle of the Hook

The 2nd South Carolina took the field early on a drizzly Saturday afternoon. We were officially representing hand picked Grenadiers that saw the heaviest fighting during the Battle. As we took the field, we immediately encountered British skirmishers. It was the first time anyone ever pointed a firearm at me and fired. As I watched the skirmishers take aim and fire at my line and I thought to myself “this is it!” Orders to take aim and fire were given. I leveled my trusty Charleville and fired. We only had powder in the barrel, but still it was a unique experience. I had never purposely discharged a firearm at anyone before. 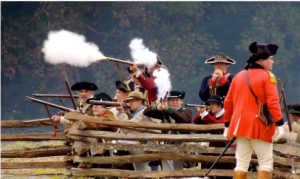 But it was all part of the game and quite fun. That is, until the fun stopped. I should of known better. After only three fires, my flint stopped sparking. Knowing my weapon’s propensity to chew up flint, I should of carried a spare, yet inexplicably I did not. After a few more misfires, I did what any good reenactor would do–I took the fall.

Appropriate? Perhaps. Wise? Maybe not. I had no idea how long the battle would last. I spent the next hour in a prone position, occasionaly peaking up to catch a glimpse of the action. At one point I even dared to think I could catch a quick catnap, but that idea went out the window once the cannons were pulled up fifty yards from me. The cannon blasts shook the ground and kept me bright and alert as any “dead” soldier could be. 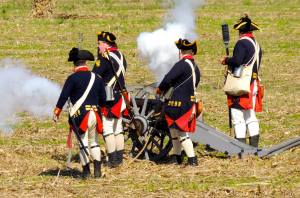 The battle finally came to a close and afterwards I was informed of the glorious maneuver in which the 2nd South Carolina surprised the British by suddenly appearing on their right flank from a corn field.

Yes, it was quite an exhilarating afternoon for those with sharp flints. However it was hard to avoid a feeling of disappointment for not participating in a larger portion of the battle. I obviously had missed out, but not all was lost. There would be another battle of the Hook on Sunday. And better yet, there would be a night battle later that evening that involved taking a redoubt from the British. I would not miss this chance to take the field again with sharp flint at the ready. As it turned out, the night assault would be the highlight of the weekend.

Up next, night warfare and the storming of the redoubt.

6 thoughts on “Return to the Hook Part 3: Battle of the Hook”

4 out of 5 dentists recommend this WordPress.com site