This past weekend I visited the National Infantry Museum in Columbus GA. The museum offered a number of well done exhibits covering the history of the American infantryman.

We began our tour by a chronological stroll through a series of life-sized dioramas depicting significant battles in the Infantry’s history called ‘The Last Hundred Yards’. The battles included Yorktown,Antietam, Soissons, Normandy, Corregidor, Soam-Ni, LZ X-Ray, and Iraq. Naturally, I spent a bit longer at the first diorama. This was a depiction of the storming of redoubt #10 by Alexander Hamilton his 400 light American infantry.

A nice detail here depicts an unnamed African American storming up the side of the redoubt. It is notoriously difficult for historians to pin a number on the about of African Americans in the Continental army (some volunteered, others were substitutes for their ‘owners’), but most agree that the American Revolution was the most integrated war in American history up until Vietnam. Blacks fought and died for both sides, and it is important to note their contributions and sufferings as both civilians and soldiers.

It was interesting to see the balance that the museum sought to strike between an honest depiction of the horror and senselessness of war while simultaneously recognizing the sacrifices and courage of the men and women who endured it. You could easily become appalled by the realities of war, but the museum strived to balance this ugly reality by highlighting the honor, courage and sense of duty that drove American men and women into the armed services.  After all, this wasn’t an Oliver Stone anti war statement, this was a Museum next to Fort Benning. 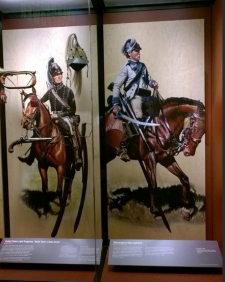 Alexander Hamilton leads the American Light into the redoubt. 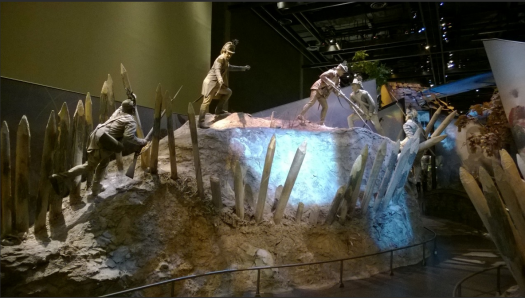 Battle of the Hook, reenactment 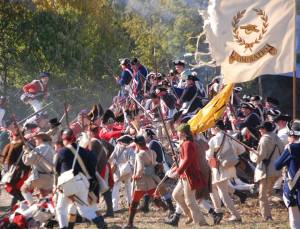 As just about anyone who has checked out my blog would see coming from a mile away, I have finally taken the plunge and will participate in my first reenactment at the Battle of the Hook. I will be joining Patrick O’Kelley’s 2nd North Carolina Regiment this coming weekend. The regiment will be depicting “Mercer’s Select Grenadier Battalion” that saw most of the infantry action during the battle. If predictions hold out, this event may even see the largest contingent of cavalry for a Revolutionary War reenactment ever.

The American victory at ‘The Hook’ shut Cornwallis in Yorktown and threw away the key, effectively ending the British general’s hopes for escape or reinforcements (thanks should also be given to the French fleet). The dreaded Banastre Tarleton partook in the battle and was injured as Mercer’s Select rushed in to support French cavalry.

So there is much to the world of reenactment that I am learning. Random thoughts:

Sleeping accommodations free of charge thanks to the 2nd North Carolina Regiment: 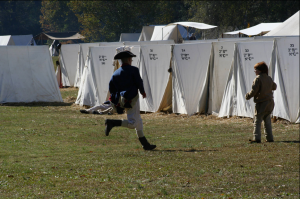 Bert Puckett Started reenacting with his family in 1976. What started as weekend family outings quickly turned into a life long passion. Bert has portrayed infantry, artillery and cavalry in his life long search for knowledge of American Colonial times and birth of our nation. Bert retired from the Army as a Command Sergeant Major after 25 years. He currently reenacts with the Third Light Dragoons with his son Hunter and his wife Chris.

1. How did American cavalry contribute to the victory at Cowpens?
Dragoons added a much needed punch for the infantry to exploit. In the two charges at Cowpens, the Third Light Dragoons managed first to save the militia that was retreating from being run over by the British 17th Dragoons and eliminating the 17th as a viable fighting force for the rest of the battle. During its second charge the Third charged British forces that were reeling from a deadly volley of musketry and managed to totally surround part of the British force.

2. Approximately how many cavalry (on both sides) participated at the battle?
There was a total of 482 mounted men on the field at Cowpens. (+or- ) 182 American horse composed of the Third Light Dragoons and various mounted militia units from North and South Carolina.

3. What different types of cavalry were employed during the battle?
The cavalry on both sides were know as “Light Dragoons”. Light Dragoons were to be used in scouting and reconnaissance roles. How ever during the Revolutionary war, Light Dragoons were used as heavy cavalry in places like Cowpens, Guilford Court House and Eutaw Springs. Banastre Tarleton was a master of using the lightning speed and the massive punch of mounted men in battle.

4. Tell us a little about William Washington, the American cavalry leader at the battle of Cowpens.
William Washington was the second cousin of His Excellency George Washington. He was born into the Virginia aristocracy and his family owned and farmed a 1200 acre plantation. Being the second son Washington was not the heir to the plantation. Nothing has been found to tell us much of Williams young life. We do know however that as a young man William Washington decided to enter training as an Episcopal minister. However by the turbulent 1770’s Washington was being drawn into the conflict that would define his life. He joined the Virginia Militia soon after the “shot heard ’round the world” at Lexington Green. On Sept 12 1776 he was elected as Captain of the Stafford County Militia. His militia unit was soon designated as the 3rd Virginia Continental Regiment. (Infantry) The 3rd Va was ordered north in the summer of 76 were he participated in the battle of Harlem Heights where he received his baptism of fire. He also participated in the crossing of the Delaware that Christmas.

In January of 1777 the Continental Congress authorized that four regiments of Dragoons were to be raised. William Washington was at that time commissioned as a Major in the Fourth Light Dragoons under Colonel Moylan. It was with this unit that Washington fought with through the entire Philadelphia campaign.

On Sept 28th 1777 The 3rd Light Dragoons were Devastated by a night time raid led by General Charles (no Flint) Grey. The commander of the Third Dragoons, Colonel George Baylor was gravely wounded and captured. General George Washington was shocked at the brutality of the attack and the loss of his friend Colonel Baylor but quickly realized that new commander would be needed too rebuild and train the remains of the Third Dragoons. Being a Virginia based unit, the choice was a natural one: he selected his cousin William Washington.

5. What are weapons commonly wielded by cavalry? What are some techniques for using them?
The American Dragoons being under supplied primarily relied on the saber. Pistols were used primarily for signaling and were extremely inaccurate beyond anymore than a few yards. If used from the back of moving horse the accuracy was negligible. Longer length carbines were rare in the American Dragoons, However, the British made use of them to a degree when dismounted. Using two hands to fire a carbine simply wasn’t practical. But above all the Horse was the primary weapon of the cavalry.

6. What kind of horses did they ride?
Dragoons of the time were mounted on small light horses capable of long distances. Usually these horse were Quarter Pacers or Thoroughbreds rarely over 15 hands in height.

7. Was is the worst fear of the cavalry man?
The worst fear of the mounted soldier was to be caught in camp with his mount unbridled and unsaddled. This happened the the Third Dragoons three times during the war (Tappan Farm, Monck’s Corner and Lenudes Ferry).

8. How did troops commonly defend against cavalry attacks?
Disciplined infantry could defend against a cavalry attack by closing ranks and forming a square with both the front rank presenting their bayonets to the front while the rear rank fired at will. Another well used technique used more often in the war was for the infantry to fall back into very thick woods were mounted men could not follow (Eutaw Springs).

9. What are some common misconceptions about 18th century cavalry?
Unlike the movies, a cavalry charge was not a head long gallop from start to finish. Strict order was essential to achieve the desired speed and shock and therefore charges typically began at a trot and progressed to a canter. A gallop wasn’t called for until fifty yards from the target.

10. What is the strangest question you’ve received during a demonstration?
Do you really sleep in those tents? Is that your horse?

11. In your opinion, who was the greatest cavalry leader/fighter or horseman of the Revolutionary war?
There were many horsemen of the time that were exceptional. But the two that stick out for their aggressive nature would be William Washington for the Americans and Banister Tarleton for the British forces. William Washington learned extremely fast how maneuver his men. Tarleton was super aggressive and was rarely beaten in the field.

Be sure to visit Bert and his companions at the 233rd anniversary of the battle of Cowpens January 2014.

Also check out Bert’s excellent summary of the Battle of Cowpens.

Also, check out a summary of cavalry equipment and tactics here:

4 out of 5 dentists recommend this WordPress.com site

Journal of the American Revolution