Almost a Miracle by John Ferling

Compelling storytelling is a craft not easily mastered by many Historians. We’ve all struggled through books that do nothing more than lead us through a dusty timeline of historical events littered with stale flat historical figures. Worse yet is the historian with a knack for unnecessary detail and little interest in exploring the complexities of human motivation.

So it is with great pleasure then that one comes across a book that covers such a monumental topic such as the American Revolution with a flair for good storytelling. John Ferling’s Almost a Miracle is just that book. The one volume synopsis of the war would be my first suggestion for someone with a casual interest in the American Revolution.

Now time for a few observations of Ferling’s fine work:

Ferling is not a big fan of Lafayette.

Using words like “petulant”, “brash” and “sycophant”,  Ferling pulls no punches when describing young Marques as an opportunist who rides the coattails of Washington. Ferling notes Rochambeau’s concerns about Lafayette’s attachment to Washington and even points a finger at Lafayette for triggering the events at the battle of Monmouth that effectively ended Charles Lee’s tenure as a general in the Continental army.

Lafayette had a romanticized interpretation of the ideals that drove the Revolution, yet his motivations were complex. He also was driven by an ambition for fame and glory and this ambition was certainly a factor in his decision making.

After the war, Lafayette never wavered from this romantic notion of the Revolution and worked to bring this vision to France. Unfortunately, he was swept up in the chaos of the French Revolution and was fortunate enough to escape with his life.

Not afraid to sidestep historical doubts in order to tell a compelling story.

When dealing with history, very little can be said with absolute certainty. Debate still continues on two instances that Ferling address in Almost a Miracle.

One is Patrick Ferguson’s choice not to fire on Washington during the battle Brandywine. Many believe Ferguson spared Washington’s life that day, yet others maintain that this was not Washington at all, but one of the many European Aristocrats participating in the war (Count Casimir Pulaski).

Another is the supposed clash between William Washington and Banastre Tarleton during the battle of Cowpens. Did they briefly engage during the end of the battle? Perhaps, but there are still doubters this confrontation actually took place.

But trifling over the fog of history can bog down an otherwise compelling story, so I applaud Ferling’s choice to avoid the debates and ambiguities that all historians must wrestle with.

Ferling does not ignore the south

Ferling points out the essential and often overlooked British southern campaign. To most, Cornwallis magically appears in Yorktown. But Ferling leads us through the series of events in the south that placed him there. Kings Mountain, Cowpens and Guilford Courthouse and the cunning Nathaniel Greene are not overlooked.

Ferling is fair to Hortio Gates and Charles Lee

Disparaged by most historians and laymen alike, Lee and Gates are often exemplars of poor generalship. Ferling does not sugarcoat their shortcomings, however he also describes them as the two most experienced and talented generals under Washington. One is left to feel a twinge of regret that Lee and Gates personal shortcomings led them to infamy.

Ferling’s take on Washington was well thought out and concise.

Was Washington a brilliant General? No. About average according to Ferling. But Ferling points out the attributes that Washington did bring to the table and notes how these were unique and essential to the position. Washington’s ability to work with congress, collaborate with the French, focus on thousands of administrative details and adapt to the circumstances made him the “indispensable man”.

In summary, John Ferling’s Almost A Miracle accomplishes the difficult feat of consolidating a long complex period of American history in a very palatable and entertaining way. This book is certainly one to recommend for all those interested in the American Revolution. Well done!

Fact 1: Live in a town, city or county named Fayetteville or Lafayette? Chances are your town was named after the French Aristocrat and Revolutionary war hero Marie-Joseph Paul Yves Roch Gilbert du Motier, Marquis de La Fayette.  General Lafayette was a close friend of Washington and a Revolutionary War hero that in many ways embodied the ideals of The Revolution. 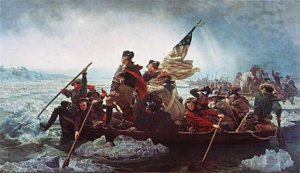 Fact 3: Washington’s famous crossing of the Delaware and the following battle of Trenton included historical figures Captain William Washington (of Cowpens fame), James Monroe (who was wounded during the surprise attack), John Marshall (the subject of Jefferson’s “Twistification” quote that inspired the name of this blog) and finally Aaron Burr and Alexander Hamilton. 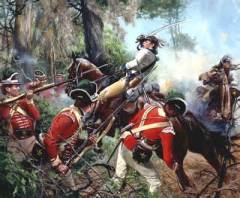 Horses (or men for that matter) don’t respond well to having sharp things pointed at them.

Fact 4: The bayonet was the single most frightening and devastating weapon used against the Americans during The Revolution. American rifles and muskets were not equipped with this military accessory. The infusion of smuggled French arms (like the Charleville musket) eventually helped tilt the balance back to American troops.