“Rapid Fire” and “Musket” are words that you do not normally see together. For the sake of a challenge, I’ve been working into my Saturday shoots a “speed round”, where I see how many shots I can get off in a minute. So far only two I am sad to say, but I am creeping closer to three the more I practice.

The rate of fire for muskets is generally believed to be two to maybe four shots a minute. The best rapid fire I’ve seen to date is this guy: 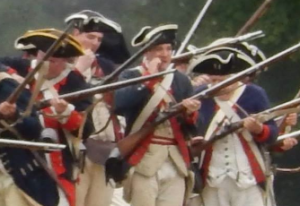 Keeping this in mind,  I’ve reduced the ball size so I can more rapidly seat the bullet in the barrel. This means that I can leave the bullet in the cartridge without fear of jamming. I’ve moved from my standard .69 cal to my pistol cal of .57. This reduces my accuracy but increases my rate of fire.

Now back to the video. I am IMPRESSED with his ability to rapidly return the ramrod back into the musket. This by far is my most challenging aspect of rapid fire. The hole is small, and if you rush it, you just burn seconds. Why return the ramrod you ask? If you leave it behind during a battle, then all you are left with is a fancy Pike. 18th Century soldiers were trained to return the ramrod.

Tomorrow I will try my hand at rapid fire once again.

Improving my rate of fire will take time.  Like any sport, it is really all about muscle memory and focus. Eventually I want to be able to make a video with proof of three shots a minute. Maybe I’ll actually hit the target, but lets just focus on one thing at a time shall we?

Here is a clip of me fidgeting around a bit. Obviously still work to be done here: 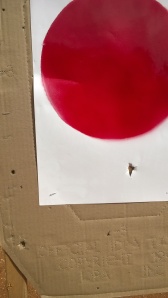 Shot four times. Hit paper twice at 50 yards. Again, this was with a smaller calibre, so accuracy was not the goal. 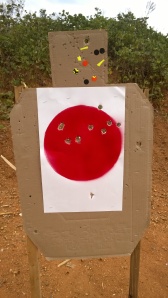 This was my grouping at 50 yards after taking my time and using .69 calibre bullets.