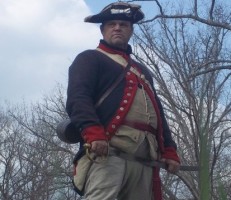 A sniper in the 82nd Airborne, O’Kelley served during the invasion of Grenada in 1983 and with the 5th Special Forces Group during Desert Storm in 1991.

Patrick has been reenacting the Revolutionary War since 1979 and has been in the same unit, the 2nd North Carolina Regiment, since that time.

I can’t imagine a more qualified person to answer a few humble questions from a Revolutionary War enthusiast. Thanks to Mr. O’Kelley for taking the time to sit down with Twistification!

What are some of the common troop types fielded by the Americans and British during the Revolution?

I’m assuming you mean what types of units were in the war.  The British army was not the “best army in the world” during the American Revolution, though many like to describe it as such.  However the British army was extremely adaptive and would change tactics, weapons and uniforms to fit the war they were in.  They remind me of the United States Army today.  A typical British Regiment consisted of several Regular Infantry Companies, one Light Infantry Company and one Grenadier Company.

In theory the Lights would move out in front of the main body and act as skirmishers, making the enemy deploy.  The Grenadiers were the “heavies” and were used as the assault force or the anchor.  The Regular companies would do the brunt work of the attack.

However theory went out the window when they fought in America.  British tactics were made for fighting in Europe, with wide open fields where artillery and cavalry could be used to their most effective.  America was not Europe and consisted of one giant forest stretching from Canada to Florida.  Not a lot of open fields and most battles happened on and around roads, since that was the only clear spot on the map. So when the British changed their tactics they basically made everyone Light Infantry.  The formations spread out in “open order” (greater distances between men) and the uniforms were modified for fast movement, such as round hats or shorter jackets.  The Light Infantry companies and the Grenadier companies banded together into Light Infantry and Grenadier brigades.

The American army started out with nothing.  No uniforms, no weapon factories, no navy, and not a lot of ammunition.  In the beginning no two units had the same drill and trying to get soldiers from one region to cooperate with those from another region seemed an impossible task.  Washington had to organize this ugly mob into some sort of a fighting force, all the while begging Congress to give him the basics and trying to appease dozens of officers who thought they should be in charge.

And when these two forces faced off, how did it go?

In the beginning the American army could not take on the British, so they relied on a defensive strategy.  Bunker Hill worked tactically, so every battle seemed to be a version of that.  When Washington was able to defeat the Hessians at Trenton, he relied on this tactic to beat the British.  However the British are not the Hessians and when Washington tried to do a “Trenton” at Germantown, it cost him.

What saved the American army was von Steuben.  He showed them how to fight like the Prussian army, using columns to move into battle instead of Indian file, and he was able to get all working together on the same drill.  Add to that the influx of French arms and bayonets, and the “new” American army was finally able to take on the British at Monmouth using their own methods.

The American army was honed to their most effective when the war came to the South.  Greene used Morgan’s strategy of a “defense in depth” of not one line, but a series of lines that the British army had to break through.  Each line made the British lose men, ammunition and strength.  It would be like playing a football game with three offensive lines guarding the quarterback and not just one.  Though Greene didn’t trust the militia, he was able to use them to their best potential as a skirmish line to slow down the British before engaging the main line of Continentals.

Patrick is currently a Junior ROTC instructor in Sanford, North Carolina at Lee County High School.  He is the author of the four volume series, “Nothing but Blood and Slaughter, the Revolutionary War in the Carolinas” and “Unwaried Patience and Fortitude, Francis Marion’s Orderly Book”.

1 thought on “Questions for a Infantry Man (Part 1)”